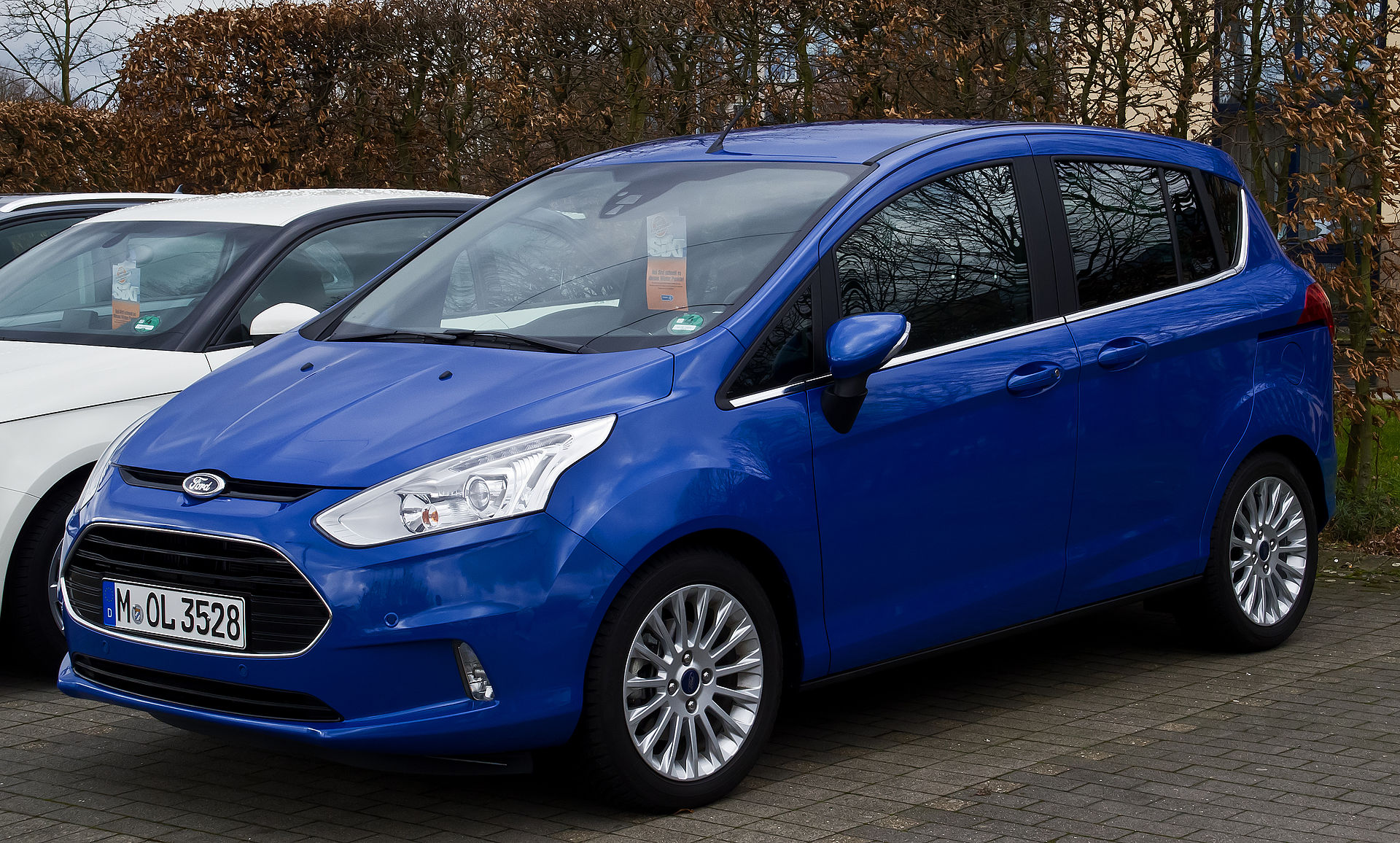 Wojtek saw me in the car, he hesitated, he put on his hood, he quickly ran up and quickly got into the car. – I hope, that nobody saw me! A few minutes later he sighed – How comfortable these armchairs! What is the Ford B-Max really like?

The car's shape is quite interesting, like a van, but some so short, a bit shapeless, it is not known if it is big, or still small. It has a compact silhouette and even a little crease. But it's a bit as if the younger brother wants to become an older C-Max or S-Max by force. He is quite tall, so we have an optical impression of a huge space. In fact, the wheelbase is barely 16 cm wider than in Fiesta. Effect: the car is quite awkward – narrow and tall, but it has something, what definitely stands out. And basically there isn't – B-pillar. The completely new construction of the door allows you to organize a picnic in all conditions – we have at our disposal 1,5 meter wide. There is probably no person, who would not appreciate this solution, but it is a nod above all to parents with children – the child can be put in the seat holding it from the front, and not from the rear as usual, doing some strange poses when someone parked extremely close to our car. No more bruised forehead, the door falling on the buttocks and the acrobatics in the parking lot! However, something for something – B-pillars have a great influence on safety and that, what in normal cars is their job, this time it was transferred to the vertical structures of the front and rear doors. The door is therefore extremely heavy, and the anti-slip lock only works when it is fully opened. A little inattention is enough and the door will slide down onto your hand.

What is inside and what was missing?

The interior is bright and spacious, this is due to the panoramic roof that attracts passengers. Even on cloudy days, it is exceptionally clear in the car in winter, and we don't feel like sardines in a dark tin. It is also elegant, as befits a French car. The driver is not distracted by a lot of information at the clocks, which are simple and legible, downright ascetic. But the console is shiny, slightly plastic and has an exceptionally large number of buttons. I suspect, that we haven't even discovered half the things, what B-Max had to offer. More is not better – iphone has one main button plus one on / off switch and millions of people love it as the most intuitive phone in the world. It could be similar in cars. What a million buttons for, if there is no navigation? In my case, theoretically, it is conducive to exploring the city, but mostly it is terrifying. As a result, if I had to go somewhere myself, it would, or I wandered around in familiar surroundings in B-max, or I was hanging on the handset and listening to Wojtek's instructions. Enough of complaining, time for fun: the driver and passenger have plenty of space plus fantastic seats – Ford B-Max is distinguished by the most comfortable seats in the world. You sit down and sigh. There is also no shortage of comfort at the rear, which is surprising, because it's a small car after all. You can twist your nose at the slightly too vertical rear bench, but it's really a matter of taste. In town, we didn't hear a word of complaint from a tall passenger in the back. And by the way, we discovered a hit – a tiny mirror for the parents – you can see what is happening on the rear seat without having to change the rear view mirror. You can see everything. We tested on an older colleague and it also worked – he was polite and not disturbing. In B-Max we find all the comforts to which we are more and more used to by producers: parking sensors (plus a rear view camera!), air conditioning and other pleasures.

A tamer of too many trash

As for the trunk, you may be surprised. No bo skoro B-Max, it has to be to the max wherever you go. However, in the case of a luggage hold, you have to tame your expectations a bit. But without exaggeration – will fit purchases, all sorts of stuff will fit. The trunk felt quite short to me, but it is manageable, for which B-Max deserves a definite plus. I suspect, that if you want to take too much stuff for trips, and more than two people are to travel by car, then we may have trouble. But how is "yes", even a standard van is not enough. There is, however, another surprise: foldable front seat (the passenger of course), so: we fold the back seat, front seat and we'll take a surfboard for the vacation.

How does he drive

The suspension is just right. Neither did it rock, nor did we bite off our tongues while driving over city bumps. It drives well and you can feel like you are in a go-kart. It's amazing, that this mediocre looking ball does so well on the road. The engine is another fascinating story associated with this car. Only a liter(!) the unit generates as much as 120 KM. But it's not just any one liter – to ecoboost – three-cylinder engine, in which each cylinder is provided with four valves, direct injection and variable valve timing. There is also a turbocharger, until recently known and used only in diesels. The turbocharger is spinning at speed 248 000 revolutions per minute and ensures torque availability from the lowest values. As a result, the reaction to the gas is immediate. Bye, bye turbo-lagoon! The sound coming out of this unique engine is also one of a kind. Sounds a bit like a scooter, but gurgling from a liter engine is hard to expect. But he cannot be denied, that it turns to revolutions nicely and is quite dynamic ... especially when we remember what engine it has inside, how much it weighs, and how much of it all smokes. And it smokes embarrassingly little and in addition it has an eco mode function, which prompts, when to shift to a higher gear, fuel consumption is even lower. If you like its appearance, it turns out to be just the perfect city car.